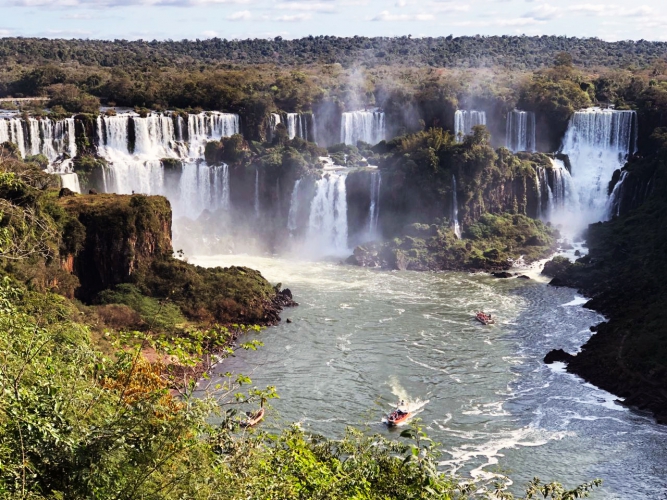 What to do in Iguazu National Park?

The Iguazu Falls are the postcard of the city, is considered one of the  natural 7 wonders of the planet, a true spectacle of nature with 275 falls in total.

In Iguaçu National Park, to take the tour you take a panoramic bus with three stops, the first is Macuco Safari, then the Cataratas Trail and at the endpoint, you will find the restaurant Porto Canoas.

Do you like adventure? Macuco Safari is a boat trip where visitors sail to the falls taking a waterfall bath. Everyone leaves energized from the ride!

On the Falls Trail, you have a splendid view of the falls and you can take pictures of the famous Coatis that inhabit the place.

At the end is the Porto Canoas restaurant, where you have lunch while enjoying the view from the top of the falls. Amazing vibe!

The restaurant specializes in traditional Brazilian cuisine, offers a wide range of dishes and desserts, with excellent service.

Do you know why there is a statue of Santos Dumont in the park? In 1916, the aviator was invited to visit the Iguazu Falls. It was the only hotel in the city at the time, Hotel Brasil, by Frederico Engel. Arriving at the tourist attraction, he was delighted with what he saw.

It turns out that the Falls had an owner, the Uruguayan Jesús Val. And Santos Dumont was outraged that the falls belonged to someone.

With this, he told Engel that the falls should not belong to a private owner.

As he was already known and had influence, he took the idea to the governor of Parana at the time, Moses Lupion. Even with his death (1932), the project was not forgotten and, in 1939, President Getúlio Vargas signed the decree that officially created the Iguaçu National Park.

Book your accommodation with us and get to know this wonder of nature.